The New London Opera Group has learned the very sad news of the death of John Lill, the moving spirit and artistic director of Louth Playgoers and the Riverhead Theatre for many years. A stalwart of the Playgoers as an actor, director and administrator since 1946, John oversaw the raising of the funds and building of the current theatre in the late 1990s. Once the theatre had opened, John invited the University of London Opera Group to present Iolanthe in Louth in June 2003, which led directly to the formation of NewLOG and our development as a performing company, initially in Louth but rapidly expanding to perform in London and at the International G&S Festival. None of this could have happened without the crucial relationship with the Riverhead Theatre instigated by John and his wife, Maureen. Our thoughts and condolences go out to Maureen and the whole family at this sad time.
Even after their retirement, John and Maureen continued to nurture the relationship with NewLOG and made a point of always attending our performances in Louth and coming backstage afterwards to congratulate the cast, until ill-health made this impossible. On the occasion of the Group’s tenth anniversary in 2014, John and Chris Cann, artistic director of NewLOG ceremonially cut a celebration cake, baked by Tracey Mackenzie, in honour of the occasion [photo below]. On hearing the news today, Chris said “I’m so sad to hear the news of John’s death. He was a great friend of NewLOG and did so much to help in our early years. My first memory of the Riverhead Theatre is arriving in April 2003 to reconnoitre the venue and being greeted at the front door by a beaming John Lill with the words ‘You must be from London – kettle’s on!’ “ 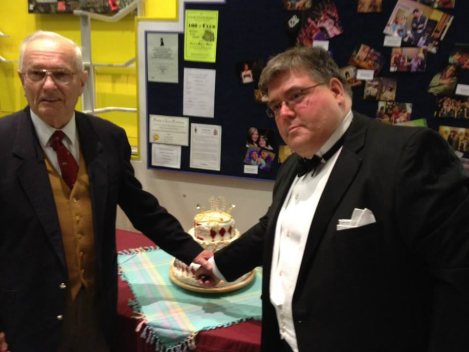 Founded in 2003, The New London Opera Group (newLOG) is a not-for-profit company dedicated to producing high quality productions in London and on tour. Besides the Savoy Operas of Gilbert and Sullivan, newLOG specialises in concert performances of lesser-known operatic gems. We always welcome new members to join our productions. Principal roles are appointed by audition; there are no auditions for chorus. Many of our productions involve an orchestra or instrumental ensemble, so we are also delighted to hear from keen instrumentalists.
%d bloggers like this: